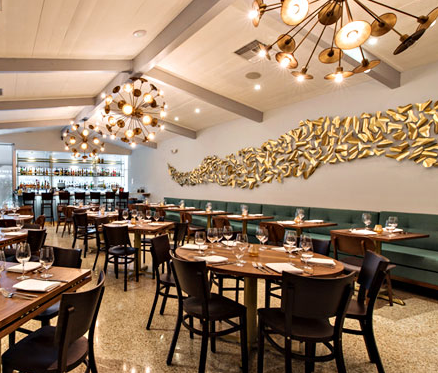 Located on the ground level of the new Langford Hotel in Downtown Miami, PB Station will be led by Executive Chef Guillermo Concha, who will offer original dishes inspired by the restaurant group’s former concepts PB Steak and PB Fish such as the Ceviche Taquitos, Steak Tartare Sliders, and French Onion Soup Dumplings, plus carefully selected à la carte steak and poultry cuts, with seafood selections varying daily based on what is fresh and local.

TiramesU {101 Washington Avenue, Miami Beach}
The latest buzz in Miami Beach’s exploding South of Fifth neighborhood is the highly anticipated reopening of TiramesU, the 25-plus-year-old establishment that has been a South Beach staple since its inception.

The restaurant made its debut in 1988 on Ocean Drive and later moved to a prime location on Lincoln Road, where it reigned for 17 years. The Italian restaurant caused a stir when it closed its doors in April of last year, announcing that it would soon reopen in the SoFi district. And now, after a seemingly forever hiatus, the time has finally come for it to reemerge bigger and better than ever.

Chef Fabrizio Pintus, who has been at the helm of the kitchen since 2010, will resume his role as executive chef, offering up a new and improved menu featuring the same authentic Italian flavors with a fun, contemporary twist.

CENA by Michy {6927 Biscayne Boulevard, Midtown; 305 759 2001}
Unlike TiramesU, which is essentially an old restaurant in a new location, CENA by Michy is a new restaurant in an old location. After a 10-month closure and a total renovation, James Beard Award-winning Chef Michelle Bernstein’s landmark eatery Michy has reopened its doors, but with an entirely new name, look, menu, and spirit.

CENA by Michy has shucked the original incarnation’s bright colors and cottage-chic décor for a clean, white color palette complemented by dark chrome starburst chandeliers. The menu is approachable yet adventurous, boasting soul-pleasing favorites as well as an array of dishes inspired by what Bernstein says are her current culinary obsessions. The menu will feature nightly selections from the restaurant’s new rotisserie and has already been praised for its innovative and Latin-inspired flavors for which Bernstein is known.