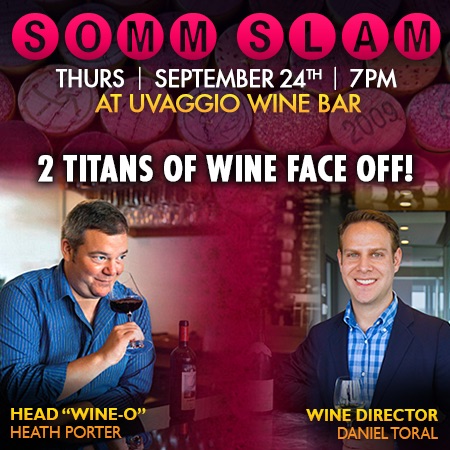 As September continues to sizzle thanks to Miami Spice, which is in full swing through the end of the month (click here for some of our top picks), there are a number of other events this month worthy of your attention. Here’s some more events and activities to look forward to.

1. “Snail Social” Happy Hour Series Kickoff
When: Tuesday, September 8, 6-8pm
Where: Vagabond Restaurant & Bar {7301 Biscayne Boulevard, Miami; 786.409.5635}
What: Join local nonprofit Slow Food Miami, along with Miami chefs, producers, and food supporters, as it kicks off this season’s “Snail Social” happy hour series. Guests will enjoy special happy hour prices on signature bites and cocktails, while they discuss the latest in local food culture with those leading the charge. Admission is free and open to the public. The series continues on the second Tuesday of every month through June 2016.

2. Interactive Cooking Class with Chef Cindy Hutson
When: Saturday, September 12, 11:30am-2:30pm
Where: Ortanique on the Mile {278 Miracle Mile, Coral Gables; 305.446.7710}
What: Join Ortanique on the Mile’s celebrated Chef Cindy Hutson as she teaches how to cook some of her all-time favorite dishes. In this hands-on experience, limited to just 24 people, participants will be teamed up in groups of eight, with a chef at each table to guide them through their lesson. Everyone will take home a gift along with a recipe booklet of what they prepared that day. This month’s recipes include: Baby Gulf Shrimp Salad, New Zealand Lamb Korma, and Putting on the Ritz Pie. Cost is $108 per person; space is limited, so reserve today!

4. Sommelier Slam II: Heath Porter vs. Daniel Toral
When: Thursday, September 24, 7pm
Where: Uvaggio Wine Bar & Restaurant {70 Miracle Mile, Coral Gables; 305.448.2400}
What: After the success of its inaugural “Somm Slam,” Uvaggio Wine Bar will host its second with 50 Eggs restaurant group, as Uvaggio’s very own head “Wine-O,” Heath Porter, goes pour-to-pour against Egg 50 wine director, Daniel Toral. The night will kick off with a charcuterie and bubbles reception, followed by a sampling of three different dishes, each accompanied by one wine pairing each from Porter and Toral. A dessert finale will follow, where the winner will be announced. Cost is $100 per person; purchase your tickets here.

5. Comedy and Trivia Nights at Elwoods
When: Every Tuesday
Where: Elwoods Gastropub {188 Northeast Third Avenue, Downtown Miami; 305.358.5222}
What: There’s always something brewing on Tuesday nights at Elwoods, Downtown Miami locals’ favorite neighborhood pub. On the first and third Tuesday of every month, get ready for some laughs as a lineup of local comedians do their best stand-up. Comedy night is sponsored by Samuel Adams, which means you can enjoy two seasonal beers for $8 all day long. On the second and fourth Tuesday of every month, come by at 8pm ready to test your useless knowledge with a fun, yet competitive, trivia competition. Bring your friends for the chance to win prizes and beer. And the best part: both comedy and trivia nights are free.