Miami Spice: What Are You in the Mood For?

Miami Spice is in full swing and we still cannot contain our excitement. While we encourage you to visit ilovemiamispice.com for a full list of participating restaurants, we know that the sheer number of choices can be a bit overwhelming. Below, we’ve put together a quick guide to narrow things down for you.

Sushi and Sashimi from Katsuya

This sushi staple from SBE Entertainment Group has locations around the world—from Hollywood to the Bahamas to Kuwait—and is known for its modern Japanese cuisine by Master Chef Katsuya Uechi. For Spice, we recommend going with the Crispy Rice with spicy tuna to start, followed by chef’s choice of sushi. The dessert is always an assorted chef’s selection, so the decision-making process is narrowed down even more for you.

Lunchtime hunger pangs often show up unexpectedly. But even when you’re hard at work, it’s best not to ignore them. Take a much-needed lunch break and head over to Cipriani, located along the bay at the bottom of the Icon Brickell. Start off with the Baby Artichoke and Avocado Salad with shaved Parmesan, followed by the Baked Green Taglioni with Praga ham. Dessert is the delicious Vanilla Meringue Cake. You’ll return to work feeling full, refreshed, and satisfied.

Located at the classic Art Deco Avalon Hotel just steps from the sand, this award-winning restaurant is a South Beach tradition. Executive Chef Kal Abdalla has created a seafood-dominated menu with tropical influences using local, seasonal ingredients and fresh-caught seafood delivered daily. Start off with the Baked Escargot with garlic butter, fresh herbs, and Pernod. Next, we recommend the Macadamia-Crusted Snapper, served with spinach risotto and raspberry Beaujolais beurre blanc. End on a sweet note with Chef Kal’s Signature Cheesecake with sugar glaze and blackberry purée.

With successful steakhouse locations all over the world, it’s fair to say that Wolfgang Zwiener knows a thing or two about how to impress his guests. Impeccable service, an expansive wine list, and a vast selection of expertly prepared 28-day dry-aged steak (not to mention an unbeatable waterfront location) all combine to make Wolfgang’s Steakhouse a must-try dining experience. Our advice for Spice? Keep things simple. Start off with a classic Caesar Salad, which will whet your appetite for your Petit Filet Mignon; then finish with a slice of tangy Key Lime Pie.

If you’re looking for a flavorful Mediterranean-inspired meal, look no further than Milos, a South of Fifth neighborhood gem. It’s one of the few restaurants in North America that lays claim to seafood flown in daily from the Aegean Sea. Hearty and healthy, it’s the perfect spot for a leisurely lunch or elegant dinner. For dinner, begin with the Greek Salad with vine-ripened tomatoes, extra virgin olive oil, and barrel-aged feta. Next, opt for the grilled Dorado Royale: Mediterranean Sea Bream, of course. Desserts are all served family-style and include the Karidopita (a Greek walnut cake) with homemade honey ice cream and what the restaurant calls “The Real Greek Yogurt”—something you don’t want to miss. 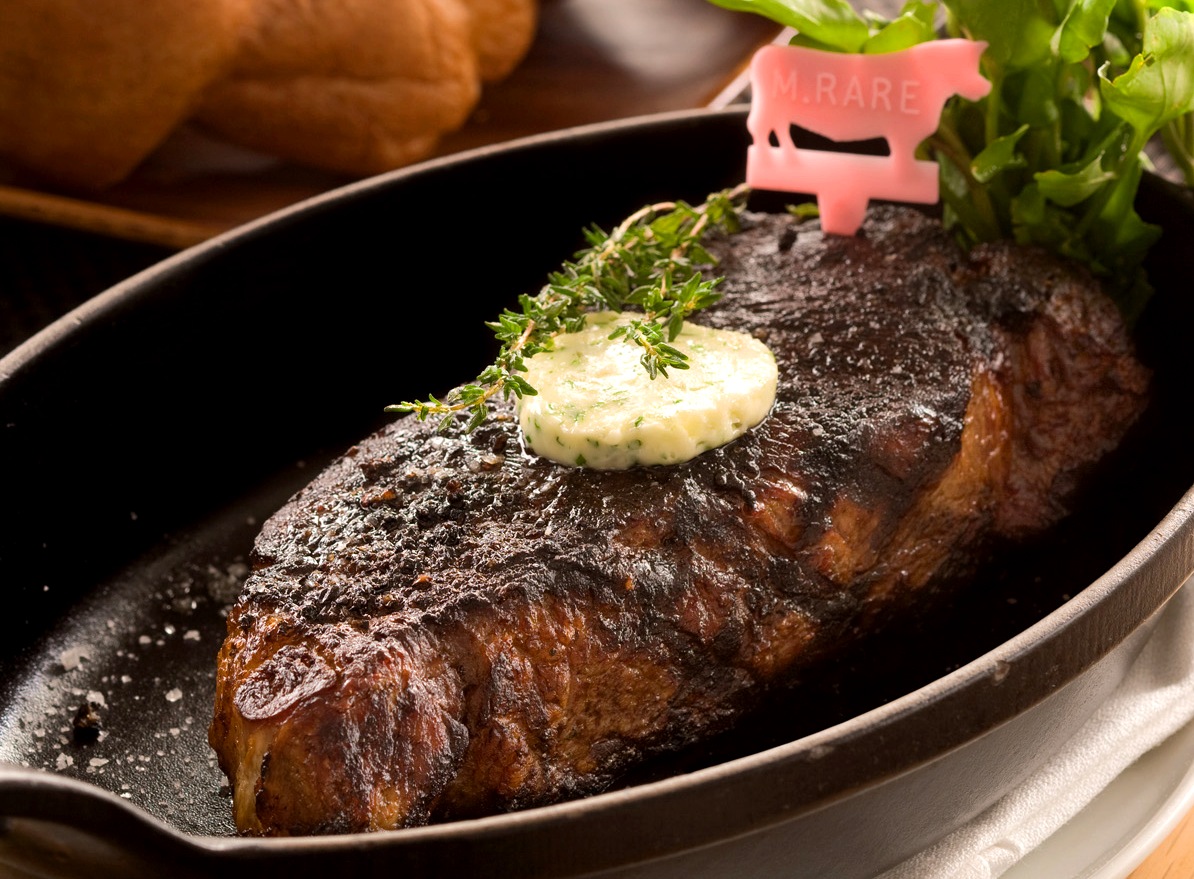 2. Prime One Twelve {112 Ocean Drive, Miami Beach; 305.532.8112}
Of course, no top 10 list of steakhouses in Miami is complete without Prime One Twelve, known for being the first modern steakhouse in the United States. Now celebrating its 11th year inside the Browns Hotel (Miami Beach’s first hotel, built in 1915), Prime One Twelve serves up some of the finest quality dry-aged meats in signature sauces alongside must-try favorites such as the Five Cheese Truffle “MAC” and Rum Baked Sweet Plantains.

4. The Setai Grill {2001 Collins Avenue; Miami Beach; 305.520.6400}
Tucked away inside the exclusive Setai Hotel is the romantic Setai Grill. Executive Chef Mathias Gervaise and Chef de Cuisine Denevin Miranda have recently added a surprising Asian twist to the menu while still offering an unmatched selection of exclusive cuts of dry-aged meat from New York City’s highly respected butcher Pat LaFrieda & Son. Be sure to try the new six-course prix-fixe menu for only $115, with the option of an additional $65 per person to include wine pairing.

5. Morton’s The Steakhouse {multiple locations}
“The best steak … anywhere!” is just around the corner. Whether you choose to dine at the Morton’s in Brickell, Coral Gables, or North Miami Beach, you know that you’ll be getting the same quality meats and impeccable service that made Morton’s a favorite when it debuted in Chicago in 1978. Morton’s continues to wow visitors in cities throughout the United States and beyond.

6. StripSteak {4441 Collins Avenue, Miami Beach; 877.326.7412}
Chef Michael Mina has done it again with Fontainebleau’s newest restaurant. This hip eatery inside Miami Beach’s trendiest hotel is a contemporary alternative to the traditional steakhouse setting, offering à la carte cuts of beef (many from the hotel’s on-site aging room and butcher shop). Be sure to stop by the StripSteak Lounge on Thursday, Friday, and Saturday evenings, when DJ Elle is present.

7. Quality Meats {1501 Collins Avenue, Miami Beach; 305.340.3333}
It was only two months ago that Quality Meats (voted the No. 1 steakhouse in Manhattan by Zagat Survey in 2014) made its Miami debut inside a historic Art Deco hotel on bustling Collins Avenue. The SoBe eatery has already proven to provide the same sophistication and superior cuisine as its New York counterpart. Partner and Executive Chef Craig Koketsu’s meat-centric menu features variations of only the best quality beefs, which are all cured, aged, and smoked onsite.

8. EDGE Steak & Bar {1435 Brickell Avenue, Brickell; 305.381.3190}
Situated inside the Four Seasons Hotel, EDGE is a hidden gem just waiting to be discovered. Executive Chef Aaron Brooks serves up a delicious menu of fresh dishes featuring only farm-to-table ingredients. If you’re lucky, try to score a table on the lively rooftop terrace so that after dinner, you can melt your own s’mores in front of the fire.

9. PM Fish & Steak House {1453 South Miami Avenue, Brickell; 305.200.5606}
PM Fish & Steak House is the Argentinian answer to a traditional American steakhouse. All meats are cooked on the restaurant’s signature grill. Because PM also specializes in fish, we recommend the Surf & Turf Puerto Madera, a combination of lobster (Bogavante from Maine) and Prime tenderloin.

10. Meat Market {915 Lincoln Road, Miami Beach; 305.532.0088}
Acclaimed Chef Sean Brasel is at the helm of Meat Market, Miami Beach’s trendy steakhouse located smack-dab in the center of Lincoln Road. The sophisticated menu changes seasonally to reflect the best flavors of the region. Whichever delectable slab of meat you order, we recommend enjoying it with the restaurant’s signature homemade MM A-100 Steak Sauce.