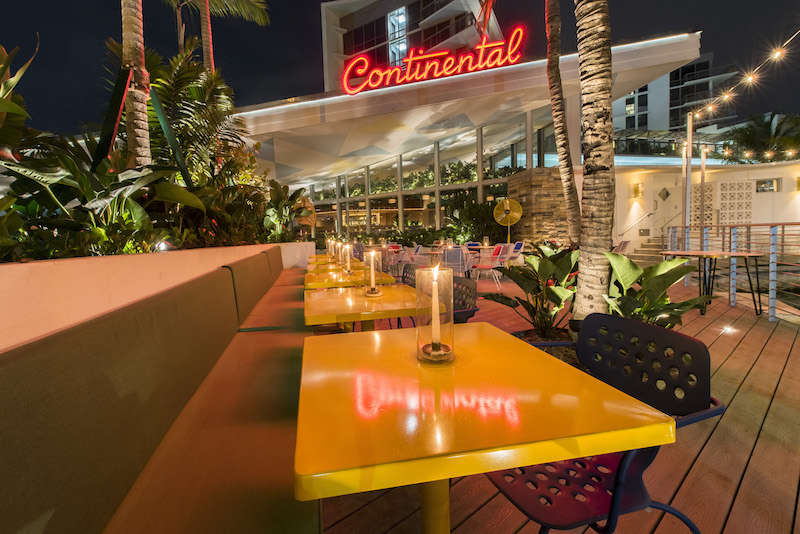 The Continental Comes to South Beach

Earlier this month, DiningOut had the privilege of eating at one of South Beach’s newest and most anticipated restaurant openings of the summer: The Continental {2360 Collins Avenue, Miami Beach; 305.604.2000}. Yes, that’s right—it’s the same Continental as the famed Philadelphia eatery and martini bar that launched the career of restaurateur extraordinaire Stephen Starr.

This is the fourth dining venture that the restaurant mogul has brought to South Florida (following in the successful footsteps of Steak 954 at the W Fort Lauderdale, Makoto at Bal Harbour Shops, and Verde at the Pérez Art Museum Miami). It’s a fitting time for this opening, as the original location is currently celebrating its 20th anniversary.

Though inspired by its Philly roots, The Continental Miami (designed by Shawn Hausman Design) has a vibe of its own, a sort of tropical-retro décor featuring greenery and bamboo accents throughout. The aesthetic translates onto the front patio facing Collins Avenue with white wrought-iron chairs and bold red and blue cushions.

Cocktails are a driving force behind the success of the original Continental, and the Miami location is no different. Working at DiningOut has its perks, and we were able to try three of the restaurant’s signature cocktails: the Dominicana Old Fashioned, La Florida Daiquiri, and the Island Thyme Sangría (pictured below, left to right). All were beautifully presented and equally tasty in their own way.

At the helm of the kitchen is Chef Matthew Oetting, who most recently was executive chef of Starr’s Caffe Storico in New York City. He worked closely with Erik Battes, Starr’s corporate chef, who has worked at New York’s Morimoto and Jean-Georges, to develop the menu. The result is an amalgamation of international flavors, from the Chinese specialties to the Puerto Rican Crispy Pork to the build-your-own sushi, where tuna, salmon, sushi rice, toasted nori, vegetables, and garnishes are presented in a bento box with instructions on how to be your own sushi master.

We started off with two amazing appetizers: the fantastically gooey, melt-in-your-mouth Cheesesteak Eggroll (above), another nod to the restaurant’s Philly roots, and the succulent Burrata with Heirloom Tomatoes and Berries salad (below).

For our main course, we split two standout dishes: the peppercorn-crusted Steak au Poivre—a juicy slab of beef with just the right amount of kick—and the Sizzling Seafood Wor Bar, mixture of lobster, shrimp, scallops, and seasonal veggies in a light garlic-based sauce, which comes out of the kitchen steaming hot like fajitas.

With just enough room for dessert, we decided to try the most curious of the bunch: the Crackerjack Sundae, a mixture of popcorn ice cream, caramel popcorn, toasted peanuts, and caramel sauce. We were unsure about the popcorn ice cream, but in reality it tasted a lot more like vanilla, creating a decadent salty-sweet combination of flavors.

In all, it was a fun and flavorful evening with attentive and accommodating service. We’re looking forward to returning soon—especially once The Continental launches its forthcoming lunch and brunch menus.