For a feast like no other, beer lovers are invited to join Chef Clark Bowen, of Downtown Miami’s db Bistro Moderne {255 Biscayne Boulevard Way, Downtown Miami; 305.421.8800}, as he teams up with Wynwood Brewing Company for a one-time-only four-course beer pairing dinner. Taking place on Tuesday, October 18, at Daniel Boulud’s Miami outpost, fans of Chef Bowen can indulge in the following menu:

This event will kick-off with a reception at 7pm, followed by dinner at 7:30pm. The cost is $60 per person. For more information about this event, or to make a reservation, contact Leah Polinski at leah.polinski@mdmusa.com.

While the craft beer movement might be consuming the American market, it’s a different story in Peru. Here, the sudsy pride from jungle to coast is indisputable: Cusqueña. From the sides of restaurants on the sloping, cobbled streets of Cusco to the electronic marquis of Lacormar mall in Lima, the Cusqueña brand is everywhere.
But why is this simply crafted brew so popular? And how does a country so rich in culinary traditions incorporate this longstanding beer into its mealtime culture?
First, a bit of history. It all began with two foreign brewers—Jakob Backus and John Howard Johnston—who emigrated to Lima, Peru in the 1800s. In the late 1880s, they incorporated as The Backus and Johnston’s Brewing Company, and began brewing the country’s flagship beers. After a flood of British investment, Johnston left Peru, and the company, in 1898. A year later, Backus died. The Brits continued to own and run the company until the mid-1950s, when assets were returned to Peru. In 1994, the company acquired longstanding Peruvian competitors National Beer Company which produced Pilsen Callao beer. After 2000, acquisition of Backus and Johnston by SABMiller made the brewery one of the most significant features in the SABMiller portfolio—a collection of beers that now includes Cusqueña, Pilsen Callao, Cristal, San Juan, and a handful of other labels.
In the Backus family of beers, Cusqueña is considered a premium brew, offered in four year-round varieties—golden lager (dorada), wheat (trigo), red lager (rojo), and dark lager (negra)—and one seasonal variety—a uniquely Peruvian beer brewed with pearl quinoa instead of wheat.
When compared with its sister beers in the Backus portfolio, there are a few things that make Cusqueña stand out from the crowd. First, it’s brewed with top-notch ingredients sourced locally and regionally whenever possible. And as anyone who has brewed beer knows, water makes the flavor—a flavor that can’t be duplicated outside of Peru.
Second, each variety is crafted with a nuanced palate. From the polestar dorada, which layers grassy undertones with a vague maltiness, to the specialty quinoa that offers surprising notes of orange and tropical citrus, these beers are not one-dimensional. Easy to drink? Yes. But not boring.

Third, the brewmeisters at production breweries across Peru—located in five cities across the country, including in Lima, Cusco, and Arequipa—brew with food in mind. While many large production beers are crafted simply to be enjoyed solo, Cusqueña thinks about how their varieties will marry with classic Peruvian cuisine. Not surprisingly, they manage that well, with apt pairings across the flavor palette of the entire country. And if a beer pairs well with a nuanced dish, it often goes well in the dish. Brewery conversations with many high-profile Peruvian chefs, including Chef Flavio Solorzáno of El Señorio de Sulco in Lima and Chef Manuel Córdova of MAP Cafe in Cusco, have opened the door to cooking with Cusqueña and alongside Cusqueña. Much like wine, the beer’s dynamic flavor profiles bring new dimensions to meals in restaurants across the country.
At the moment, Cusqueña is available only on the eastern seaboard in the U.S., but the hopes are to expand distribution so that American markets get to enjoy the same beer that has captivated Peru for decades. And with that introduction, Peruvian food is bound to follow—a palate-astounding journey that will re-craft our appreciation for beer and South American cuisine.
To get a taste of this premium cerveza, visit cusquena.com and look for recipes at diningout.com made with and for this scrumptious South American brew.
By Jeffrey Steen, Managing Editor

When it comes to good Italian classics, few do it better in Miami than the South of Fifth Staple, TiramesU {101 Washington Avenue, Miami Beach; 305.532.4538}. And on August 31st, this restaurant will wrap up Summer 2016 in style by hosting an Italian-inspired, beer-pairing dinner with none other than Varese-based brewing company, Birrificio Angelo Poretti. Priced at just $65 per person, this five-course feast is filling up fast, so see what food Chef Fabrizio Pintus has in store below and make your reservation(s) now. 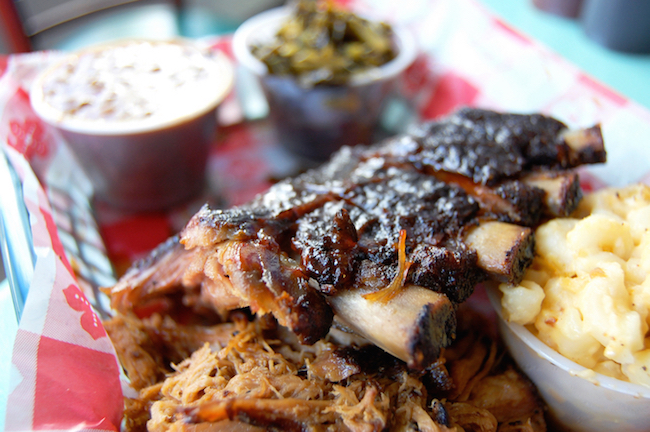 What if we told you there was a casual, homegrown, no-fuss barbecue joint where you could sit back, relax with friends, sip on craft beers, and nosh on what have been named the best ribs in the city? You may shake your head and say that kind of place doesn’t exist in Miami. But it does!

Sparky’s is the brainchild of Hans Seitz and Kevin Kehoe, two chefs who met back in 1987 while working under Chef Michael Moran at a restaurant called Who’s in the Grove. The two friends parted ways for a while before meeting up again in Miami to open up their barbecue venture—and adventure—in 2010.

Five years later, Sparky’s is still going strong, staying true to its philosophy: to make the best barbecue out of the best ingredients. “We make everything in-house—except for the fries and the ketchup!” Hans says.

The décor is cool and casual, with various tchotchkes covering the walls. Dozens of craft beers (both bottled and draft) are on offer, and Sparky’s prides itself on only serving American varieties.

Of course, the ribs are a must-order, though we also recommend the Pulled Pork Plate and the Jerk Chicken, both of which were absolutely fantastic. The signature homemade rubs and sauces add to the one-of-a-kind dining experience, not to mention the fresh-daily desserts—the pecan pie is a personal fave. You can’t go wrong when choosing sides, but our top choices had to be the Macaroni and Cheese and the Sweet Potato Mash.

The “Beat the Clock” Happy Hour is particularly popular, as young professionals gather here for a drink or two after work during the weekdays. Drafts start at just $4 at 4pm, and go up one dollar each hour until 7pm. They also offer half-off wings and hush puppies.

No visit to Sparky’s is complete without starting off with a piece of perfectly textured, freshly made cornbread, served warm and with butter—exactly as it should be. 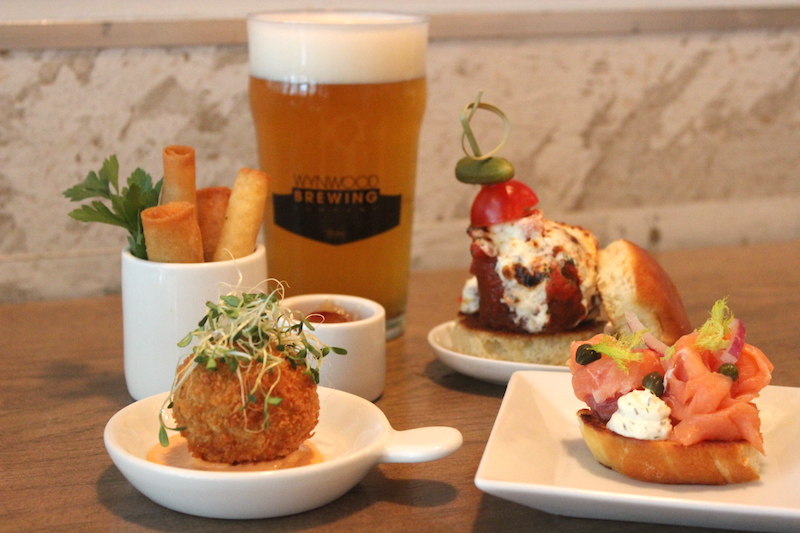 Together, MOB’s Chef Ralph Cohen and Wynwood Brewing’s “Missionary of Beer” David Rodriguez have created a mouthwatering nine-course tasting menu highlighting the best flavors of both New England and Miami, each paired with an equally tempting on-tap craft beer.

Guests can expect classic MOB dishes such as oysters (naturally) and the Smoked Scottish Salmon on toasted brioche with dill cream cheese, plus a handful of modified versions of current dishes—the Meatball and Goat Cheese Sliders and the Grilled Gulf Oyster Kilpatrick, for example—to enhance and complement the beer flavors.

In addition to classic Wynwood Brewing beers such as La Rubia Blonde and Magic City Pale Ale, guests will be able to sample seasonal specials such as Rickenbacker Pilsner (paired with Shrimp Spring Rolls with mango chutney) and Father Francisco Belgian Golden Strong (paired with Chicken Teriyaki Skewers) along with some specialties such as Stiglitz and Scotchy Doesn’t Know Scotch Ale.

The event will take place at Midtown Oyster Bar from 7-9pm. Cost is $75 per person, all-inclusive. To purchase tickets, click here. 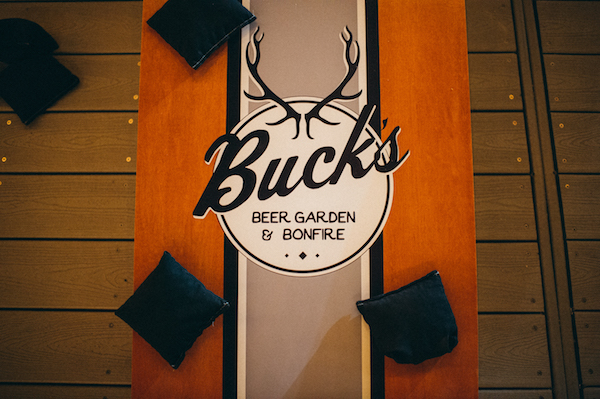 Looking for a fun, casual, and—dare we say—affordable evening in South Beach? You’re in luck. The iconic Raleigh South Beach {1775 Collins Avenue; Miami Beach 305.612.1163} recently introduced Buck’s Beer Garden & Bonfire, a laid-back German beer-garden-inspired event taking place the first and third Thursday of every month from 6 to 10pm. With a name inspired by the hotel’s antlered logo, this outdoor extravaganza takes place in the hotel’s Backyard Oasis, a tropical setting behind the pool.

Surrounded by bonfire pits and picnic tables, guests can enjoy an evening complete with food stations from Restaurant Michael Schwartz (think: bratwurst, kielbasa, knockwurst, and currywurst topped with sauerkraut and beer-bathed onions) and draft beer from local craft breweries that change each month. And the best part: it’s FREE to attend. You’ll have to option to “pay as you go,” by purchasing tickets for food, beer, wine, and other bar drinks (one ticket = $1).

Complimentary lawn games such as corn hole, ping pong, and giant Jenga will be on hand for guest entertainment while do-it-yourself s’mores kits can be purchased for fireside roasting.